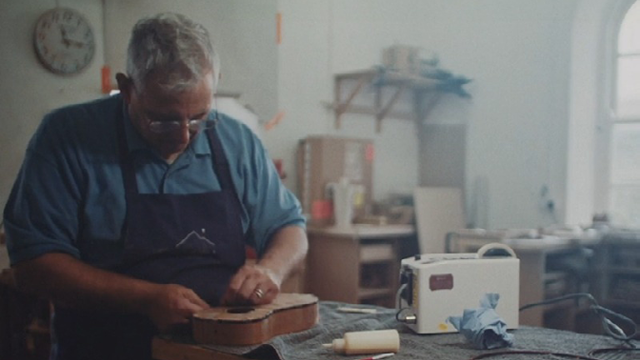 A master luthier reflects on his life’s work.

Pete Howlett, is 63 at the time of filming, had decided on his life’s target of making 1,000 instruments long before his diagnosis – he’d passed the 687 mark when he was diagnosed with Parkinson’s.

He focused all his attention on his quest to reach his life goal of completing 1,000 instruments – what he considers a “lifetime’s work” – and he’s adamant the disease won’t stop him. It is what he says all the big masters did during their life like Stradivarius.

He asked his previous intern Tommy a master craftsman from Germany to come and work with him to finish his goal of creating 1,000. instruments, Tommy becomes like a son to him.

RHYS EDWARDS is a highly experienced television lighting cameraman/director of photography. He worked on numerous award-winning, primetime documentaries both in Wales and internationally, receiving many awards including three Bafta Cymru nominations for best factual photography. Producing and directing came as a natural evolution and after many successful collaborations with established production houses, He formed ‘Docshed’; a modern, independent production company crafting creative and visual programmes and films. Docshed has some exciting projects in development with premium broadcasters for theatrical and televisual releases.