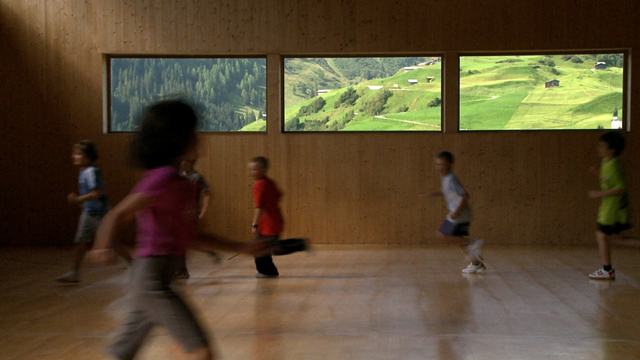 Resuns, which means “echoes”, explores the diversity, sound and melody of Romansh, one of Switzerland’s four official languages. Spoken by a small minority, Romansh seems doomed to disappear in this age of globalisation. However, for the protagonists of this visual and sonorous poem, the language symbolises their belonging, identity and resistance.

This film opens a window on Romansh, a language spoken only in the heartland of the Swiss mountains. The music of the language echoes throughout the valleys and the seasons, blending in with the sounds of the surrounding nature. The film draws upon the texts of an author, the games of a child, the songs of a comedian, and the story of a woman who learned the language because of her love for a man.

“Resuns”, or the slowly-dwindling echoes of a dying language, reminds us that our identity is also rooted in our voices, in the choice of our words, and in their sonority. Our attachment to a language goes beyond borders and raises universal questions. It is a poetic and intimate portrait of a minority at a time of globalisation.

After having studied at the Universities of Geneva, Barcelona and Berlin, Aline Suter, born in 1982, specialised in film studies. She has worked on the programming of numerous festivals and is currently an independent director.

Céline Carridroit, born in Paris in 1982, obtained a diploma from the Haute Ecole des Arts Appliqués in Geneva and subsequently did a master’s degree in film directing in France. In 2012 she was a co-founder of the documentary film production company Les films de la caravane.