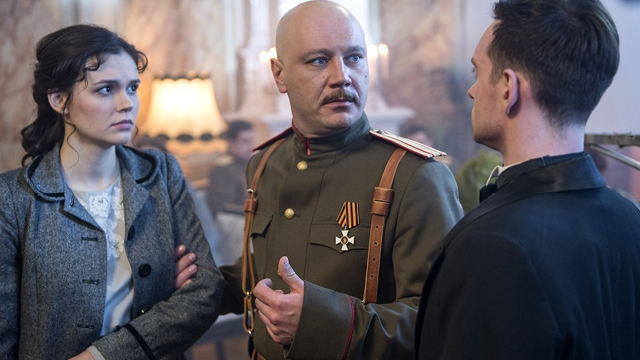 The series starts off in a suit in the historic Londonskaya Hotel 1975, where a violin maestro Ozon is preparing for a concert while reminiscing about his youth playing with a souvenir he has around his neck. When he receives champagne that he has not ordered he is poisoned, by the hotel maid and her mysterious companion.
We are then transported back to Odessa in 1916 where Liza and Matvei met during the time of revolutionary events and fell in love. Thanks to the power of a magic souvenir and his violin music.
The costume drama “Souvenir from Odessa” unfolds during the 20th century. Around the time of the Bolshevik coup in 1917, Odessa experienced three years of changing hands between seven powers. While power in Odessa swiftly passes from hand to hand, and the influence of local criminals remains unchanged, two young lovers, Matvei and Lisa, try not to become pawns in the games of gangsters.

Odessa is a port city known for its incredible charm. In the early 1900s, it was run by a criminal elite. The Ukrainian series covers the events after the October Revolution of 1917, when the situation in the city becomes unstable, and in Odessa there is a constant struggle between criminal authorities and the Bolshevik authorities.

Such famous personalities as gangster-Jewish revolutionary-Soviet military leader; Mishka Yaponchik and  Grigory Kotovsky take part in complex political schemes and street fights. However, in the centre of the plot are ordinary people – the musician Matvey and the teacher Lisa. What awaits the heroes of this intricate story at the very end? Will their love overcome all the obstacles of a difficult time?