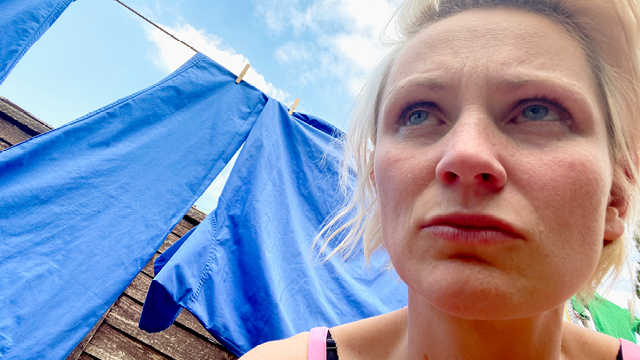 Lifelines (Cyswllt) is an intimate drama, providing a snapshot of life during a pandemic, illustrating the effect of lockdown on individuals and families. In a pioneering move, the series was shot using laptops and mobile phones – the same technology that kept everyone in touch during lockdown: reflecting the changes occurring in our lives, as it happened. Lifelines captures the emotional and physical changes everyone was experiencing, as our relationships and behaviour were shaped by fear. Warm-hearted and compassionate in tone, the series interweaves the stories of family and friends when what it means to be human is being challenged and redefined.

In strange and unprecedented times, where plans are cancelled and technology has become our only means of contact with the outside world, an exciting new lockdown drama is born. Shot mainly in our cast’s own houses and nearby location, Lifelines hopes to capture the hopelessness and the hopefulness of lockdown for all generations. The vibe is intimate, by turns joyful and desperate, capturing how our lives, emotional and material are being shaped by the virus.

Over the three episodes, things change: the newly planted seeds grow; the beard grows; the cupboard of neglected ingredients empties; the social media statuses change; the characters develop new strategies for survival as the world moves through lockdown and into summer from spring. Shot over three weeks in real-time, the series captured the change in our lives as it happened, making Lifelines fresh and topical and current.

“It gradually unfolds into something approximating a thriller, yet one that touches on the related lockdown issues of mental health, loneliness and domestic abuse. Boosted further by a phenomenal cast, this is both seat-of-your-pants film-making and edge-of-your-seat television”
– Andrew Male, The Times

“BAFTA Cymru Recommends Cyswllt (Lifelines) on @BBCiPlayer – a new drama series reflecting the world we live in at the moment under lockdown, by the team behind hit series Keeping Faith.”